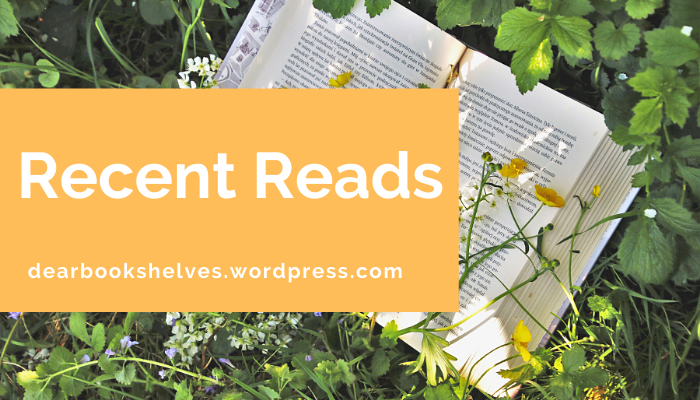 Here are the last of the books I read in April while also participating in a 30 Days of Manga challenge. This week I have a beloved fantasy I didn’t really love, a historical fiction with a touch of magical realism, and a phenomenal YA fantasy. If you want to see more, you can find my last “Recent Reads” here.

The House in the Cerulean Sea by TJ Klune

A magical island. A dangerous task. A burning secret.

Linus Baker leads a quiet, solitary life. At forty, he lives in a tiny house with a devious cat and his old records. As a Case Worker at the Department in Charge Of Magical Youth, he spends his days overseeing the well-being of children in government-sanctioned orphanages.

When Linus is unexpectedly summoned by Extremely Upper Management he’s given a curious and highly classified assignment: travel to Marsyas Island Orphanage, where six dangerous children reside: a gnome, a sprite, a wyvern, an unidentifiable green blob, a were-Pomeranian, and the Antichrist. Linus must set aside his fears and determine whether or not they’re likely to bring about the end of days.

But the children aren’t the only secret the island keeps. Their caretaker is the charming and enigmatic Arthur Parnassus, who will do anything to keep his wards safe. As Arthur and Linus grow closer, long-held secrets are exposed, and Linus must make a choice: destroy a home or watch the world burn.

An enchanting story, masterfully told, The House in the Cerulean Sea is about the profound experience of discovering an unlikely family in an unexpected place—and realizing that family is yours.

“Change often starts with the smallest of whispers. Like-minded people building it up to a roar.”

I’m really torn about this book so I’m going to break this review up into things I like and things I don’t like. I really appreciate how many touching moments there were with the kids. They really were the best part of the story. The humor really was exactly my style and I laughed out loud more than once. I also was really interested in the interactions between the kids and the villagers in town. There was definitely some prejudice on the side of the villagers and so you never knew what was going to happen when they were confronted with the kids just trying to live their lives. This book really gets into themes of acceptance and the way people who are treated. It’s nothing new and groundbreaking but it was pretty cute.

That being said, I think the pacing for this book was not the best. I had a hard time getting into the story in the beginning and it felt a bit slow. I think the second half picked up a bit but the start was a little lacking plot wise. I also found it strange how focused TJ Klune was on Linus being overweight. It came up so much. I think he was trying to make a point about accepting yourself or about internalized fatphobia but it just felt weird and forced and I really did not enjoy those throwaway comments about how Linus felt like he shouldn’t eat X because he’s worried about his weight or whatever. Overall, there are cute elements to this story and they made me laugh but, for me, the annoying bits are practically equal to the things I enjoyed.

The Night Tiger by Yangsze Choo

A sweeping historical novel about a dancehall girl and an orphan boy whose fates entangle over an old Chinese superstition about men who turn into tigers.

When 11-year-old Ren’s master dies, he makes one last request of his Chinese houseboy: that Ren find his severed finger, lost years ago in an accident, and reunite it with his body. Ren has 49 days, or else his master’s soul will roam the earth, unable to rest in peace.

Ji Lin always wanted to be a doctor, but as a girl in 1930s Malaysia, apprentice dressmaker is a more suitable occupation. Secretly, though, Ji Lin also moonlights as a dancehall girl to help pay off her beloved mother’s Mahjong debts. One night, Ji Lin’s dance partner leaves her with a gruesome souvenir: a severed finger. Convinced the finger is bad luck, Ji Lin enlists the help of her erstwhile stepbrother to return it to its rightful owner.

As the 49 days tick down, and a prowling tiger wreaks havoc on the town, Ji Lin and Ren’s lives intertwine in ways they could never have imagined. Propulsive and lushly written, The Night Tiger explores colonialism and independence, ancient superstition and modern ambition, sibling rivalry and first love. Braided through with Chinese folklore and a tantalizing mystery, this novel is a page-turner of the highest order.

“We were a chocolate-box family, I thought. Brightly wrapped on the outside and oozing sticky darkness within.”

I haven’t read much historical fiction or magical realism recently and that might be why I found the beginning of this book to be pretty slow. When I did start to latch on to this story, I was primarily thinking about it from an academic perspective since I was exposed to a lot of colonial literature in undergrad. I think this story is interesting as a foil for those texts since it’s written by a woman of color and offers undeniable criticism of colonization. This story contains a great deal of mystery and mysterious deaths and at the center, it appears at least one white doctor is the common denominator. Malaysian people are the primary victims, many of whom are women and that gave me a lot to think about in terms of colonization criticism. If I were going to write a research paper, I might pair this with something like South Sea Tales by Robert Louis Stevenson and talk about how authors of color are now able to combat these narratives and use their own voices via historical fiction while celebrating their cultural traditions through magical realism.

I know this review is REALLY different from what I usually write but 90% of my notes on this book are me thinking about how I would write a paper about this text. The other 10% is about how much I didn’t enjoy the toxic romance and how magical realism is really hit or miss for me.

The House of Hades by Rick Riordan

Since this is the fourth book in a series, I will link the synopsis to the first book here, and this book here.

This *might* be my favorite book in the Heroes of Olympus series so far. The main characters are really split up in this book so that means there’s a lot of jumping around. I really enjoy stories that do that because the pace feels even faster than it already is. I was particularly interested in Percy and Annabeth’s situation. Riordan also blesses us with more Nico content and the reveal from him around the halfway point broke my heart but also made me happy. Protect Nico at all costs, thank you. There is also a plot line with Leo on his own that I thought was very cute. Before this, I wasn’t super invested in Leo as a character but I think this really raised my interest. The themes of friendship felt so particularly strong in this book and I am nervous to see what happens in the final book of this wonderful series.

What have you been reading recently? Have you read any of these? Are you interested in any of them? Come chat with me!

I'm somehow done with school and I still want to talk about books. View all posts by dearbookshelves

One thought on “Recent Reads 13”